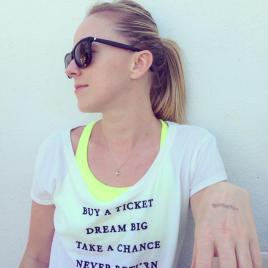 ENG: Have you ever met someone who’s energy was like a hurricane, but instead of causing damage it would fill you up from head to toe? Who eats challenges like you eat popcorn in the cinema? Meet Susan (aka Bircsi), today’s FAB WMN, originally from Slovakia, currently living in New York.

It was through a mutual friend that I got to know her, and I admired her spirit from the very first moment. If I had to relate a word to Susan, it would definitely be “Adventure”. She travels all the time (lived in Budapest, in London, in New York), and being capable to adjust and change constantly is a fantastic attribute of hers. She’s extremely kind, she’s a natural leader and an enthusiastic feminist.

Below you can get to know this fabulous woman a bit better:

If you are asking what my job is, I’m sitting in a corporate office in the middle of Times Square, NYC, currently solving IT problems (before that I did documentation and negotiation work, and was head of the European client on-boarding team, also for corporate banks). But I never really believed that your job defines you, since most of us are doing this for the paycheck.

What I really do: I am a recently certified yoga teacher; I’m studying to become an interior designer; I learn to do a sport every year and I constantly challenge myself by doing new things that myself or the people around me thought I’m not capable of doing just because I’m a woman or a minority. I travel a lot to see the world. I volunteer with ONE.org, NRDC.org and Amnesty International and NewYorkCares.org.

The best part of the corporate job (other than the paycheck) is that it brought me to the greatest city in the world, New York. The others fulfill me completely and make me who I am.

There were so many and I seriously can’t pick one that stands above all. Can I pick 2 proud moments of last years? One was when I ran the London marathon, and the second when I became a scuba diver –  despite of my fear of deep water and thinking I’m not able to run more than 5k… I’m very proud of being asked for this interview, too. 🙂

My favorite thing about New York are the people; I think people make New York such a great city. I remember after Sandy hurricane hit and we went to help the people in need to distribute blankets and food, the whole city came together in a heartbeat and people my age and younger got involved to help. You can feel the same support on every marathon in November, people go out in the cold just to cheer for strangers and support the causes they run for. After the recent elections the anger and shock that is going through the entire city is also very visible and touching… . It shows every time how much this city cares and it is very emotional to see.

What I loved about London the most were the farmers markets and food markets (Maltby street was my fave), and also since I’m a big advocate on environmental issues and climate change London for me stood as an example in addressing the plastic bag issues (usage dropped by 85% since they introduced the 5p charge) and all those actions they are taking to improve air quality – I’d love to see New York to follow its example! London was also great to live in due to its close proximity to continental Europe (2 hours train ride to Paris), which is heartbreaking for me to see demolish after #stupidbrexit.

BEING A WOMAN. (and the fact that we could pull together a joint, peaceful protest on all the 5 continents at the same time, on 1/21/2017, marching for human rights. No man could ever pull that off. Ever.)

His Holiness The Dalai Lama.

With Yoga, meditation, pray or laugh. Sometimes all 4 at the same time.

…a book to read – Marianne Williamson: Return to Love

…a film to watch –The Matrix trilogy

…a song to listen to – Unwritten by Natasha Bedingfield